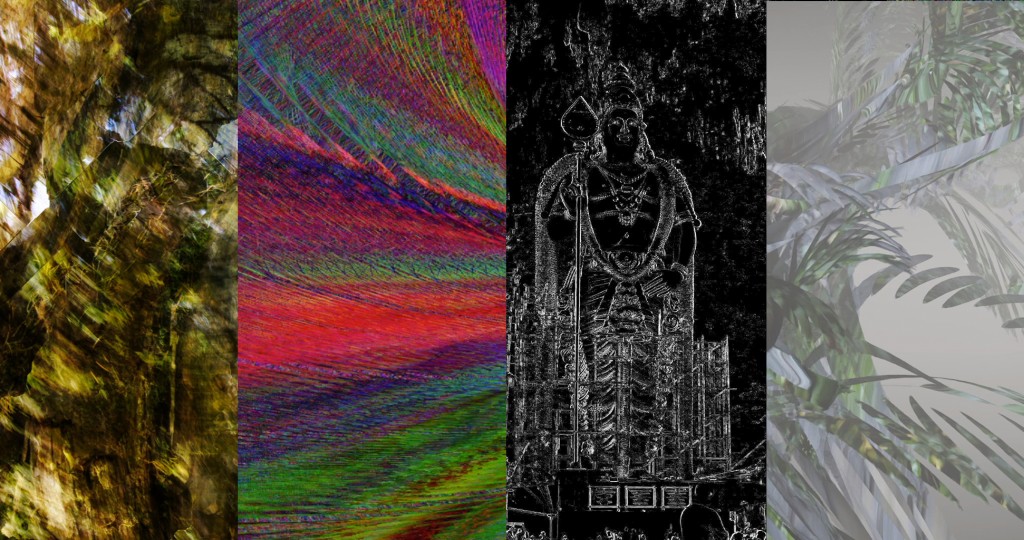 Cathedral considers the relationship of the screen to earlier forms of mediated light, such as stained glass, an art form designed for quiet contemplation. Through a merger of organic and digital forms, this work seeks to generate a similarly contemplative oasis via a refracted metamorphosis of the Douglas Firs of Cathedral Grove in MacMillan Provincial Park.

Grid024 is part of a series of ongoing video paintings that are each recorded in a single, improvised take in real time using live image mixing software. Pre-existing material is remapped through transformations of density, movement, scale and rotation, generating complex shapes and patterns over time.

Dan Browne (b. 1982) is a filmmaker, photographer and multimedia artist whose works explore patterns, nature, and sensory perception through dense and kinetic forms. Dan’s films and videos have been presented at over one hundred venues worldwide, including International Film Festival Rotterdam, Oberhausen, BFI London, Centre Georges Pompidou, Images Festival, Festival du nouveau cinéma, and TIFF Cinematheque. His practice as a media artist unfolds within a variety of contexts and forms, including installation, with current video commissions in public spaces in Toronto and Vancouver, and live video performances at festivals and events, including MUTEK and Vector Festival. For more information please visit www.danbrowne.ca

Memory and Ritual in Frame Difference is  was produced during an artist residency in Malaysia. The work is a meditation on the complex relationships between ritual and public space at the Batu Caves in Kuala Lumpur, Malaysia. In a space shared by both devout hindus and tourists, the frame difference processing allows the viewer to focus on action and change within the recording. Electronic insights of body vernacular happening in mediated time.

Jason Bernagozzi is a video, sound and new media artist living and working in upstate New York and is the co-founder of the experimental media arts non-profit Signal Culture. His work has been featured nationally and internationally at venues such as the European Media Arts Festival in Osnabruk, Germany, the LOOP Video Art Festival in Barcelona, Spain, the Beyond/In Western NY Biennial in Buffalo, NY, and the Yan Gerber International Arts Festival in Hebei Province, China. His work has received several awards including grants from the New York State Council for the Arts, free103point9 and the ARTS Council for the Southern Finger Lakes.

With an interdisciplinary approach to art making; from video, sculpture, to 2D work and installation, Stephen Nachtigall’s practice explores intersections of ecology, technology and culture from a perspective planted in mimesis, transparency and simulation. Born in 1986 in Calgary, Canada, he received a BFA from the Alberta College of Art + Design in 2011, and an MFA from the University of Oregon in 2016. Nachtigall has exhibited internationally in solo and group shows in Germany, Scotland and across the United States and Canada. He currently lives and works in Eugene, Oregon.

Plants are rooted in the ground, their position relatively fixed. They are headless, receiving their nourishment both from below and above, along the whole expanse of their corpus while also releasing oxygen and providing nourishment in turn. The posture of a plant connects to what lies below, and stretches out above and surrounding itself to connect the various elements that make up its ecological environment. As such, perhaps plants can be seen as a kind of avatar for an expanded notion of consciousness and relationship to the environment. If plants were to demonstrate sentience through technological mediation in much the same way that humanity has embraced it, what might that look like? Sway presents a plant image, mediated and affected by simulated forces that allow it to move and twist its body as if by its own accord. The plant dances across the screen as if striving towards an embodiment of nonhuman expression, and an expanded terrain of coexistence.

The Media Wall is a one-of-a-kind exhibition space located in the atrium of the Hurley Convergence Center at the University of Mary Washington in Fredericksburg, VA.
The wall is over two stories tall and is comprised of 43 separate Laser Phosphor Display tiles.
A new set of videos will run every month on a 24 hour continuous loop.